I LOVE the Valley Community Center. Especially, this time of year because it has been soooooo cold. It’s an awesome place for the kids to burn off their energy, you can get some yummy snacks, chat with other parents, AND they have awesome kids classes! 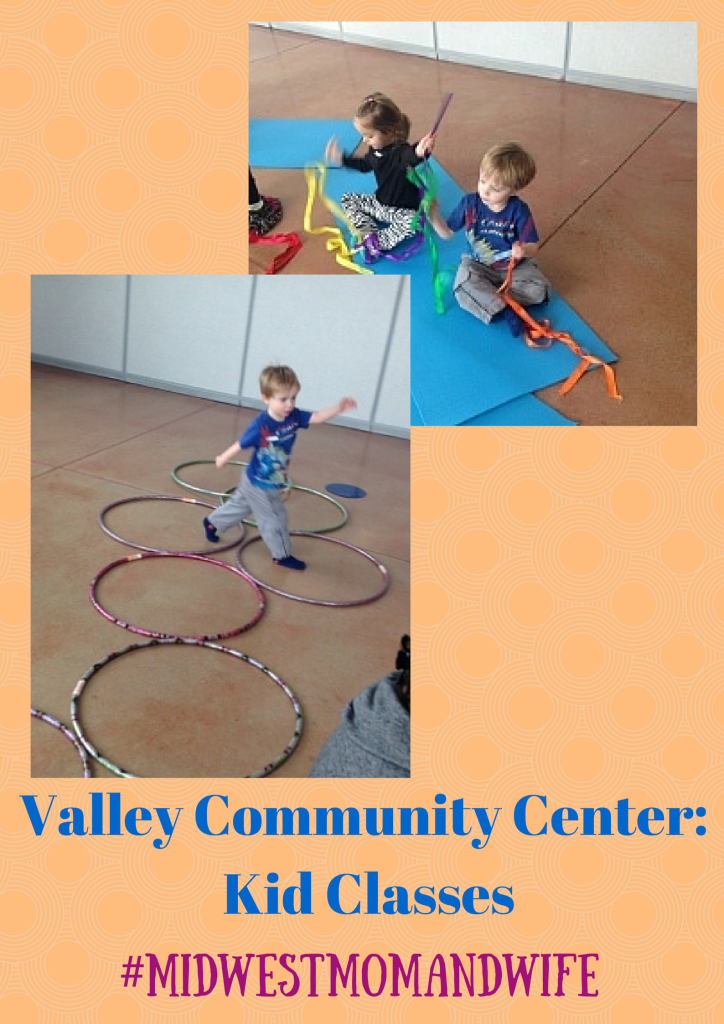 The kids and I spent the entire morning  this week at the Valley Community Center and while we were there we checked out the Creative Dance for Kids class. They had a lot of fun!

The class incorporates fun animals, food, sounds, and more. To get the kids moving, they imitate animals and in this particular class, they pretended their bodies were cake! It’s a great way to get the kids using their imaginations.

The kids enjoyed rolling around on the tumbling mat like sea creatures, in the water!

They also use hula hoops to jump in and out of.

Everyone’s favorite were the colorful streamers the kids were able to play with! They pretended to paint and danced around.

There were two teachers in the classroom and they were very patient and worked well with everyone. They encourage you to drop your kids off and wait outside, in the cafeteria area, during classes. They were very welcoming to us parents who brought our children for the first time though!

Creative Dance for Kids is for children ages 2 through 5 years. There are several classes that are offered through out the week. They also offer …

They also offer Kids Storytime EVERY Tuesday 10 – 11 am for FREE!

The best deal is to purchase an activity punch card. They sell punch cards for 10 classes for $30.00 or 5 classes for $15.00. You can use the punch card for the kids classes AND for the adult classes. Check out their calendar for what classes they offer for adults and for other kids classes/sessions they are offering!

Monte and I have fallen in LOVE with the Valley Community Center!

I learned about the Valley Community Center from my favorite Facebook group, Des Moines Beyond 4 Walls! This place has so much to offer for FREE and/or not very much money! Not only for children, but for adults also!

Our favorite thing is the kids play area. It is a great place to take your kiddos when the weather is icky and cold. Monte can spend hours running around, playing on the equipment and meeting new friends. Oh, and it’s FREE! Score! 🙂

There is free Wi-Fi and a small little cafe, Maplenol Cafe, where you can order espresso, coffee, smoothies, and small snacks. There is also a  fire place in this area with big comfy couches. You should always be supervising your child while they are in the play area, but there are large glass windows so you can sit in the cafe, sip coffee and watch!

The Valley Community Center also offers classes for a small fee for children and adults. Right now they are offering …

These classes are between $3-$5 a class. You can buy a punch card and save some money! Some of these classes and other classes, I have not listed, may require pre-registration. Check out here for an entire list and calendar!

The Valley Community Center is only open during the week, but you can reserve certain areas during the week and/or weekends. I think this would be an awesome place to reserve out for a winter birthday party! Check out here for more information and prices.

What is your favorite thing to do at the Valley Community Center?

There are so many Halloween events that go on this time of year, in the Des Moines area! It’s so hard to pick and choose a few to do and see. We did some more fun activities this past week and none of them disappointed!

The Great Pumpkin Party was a three day event held by Valley Church in West Des Moines. We were not able to make it out until the final night, Thursday. Tuesday night was was specifically for families with special needs, which I thought was awesome! This event was so large, it was held at the Valley Church and the Valley Community Center across the street.

We were there right at 6 pm when the doors opened!

They had pony rides, right outside. Monte was soooo close to ride, but he got very nervous once he sat down on the pony.

The worship area was full of inflatables and right when you walked in,there was a huge Lightning McQueen inflatable slide. You should have seen the look on Monte’s face!

This event also consisted of live music, an illusionist, face painting, photo booth pictures, games, a petting zoo, ice cream, popcorn, lemonade, and MORE! All of this was FREE!

Monte’s favorite part of the evening (besides the large inflatables) was taking his picture with the super heroes!

Saturday evening we made it to the Annual Grimes Halloween Fest at the Grimes Community Center.

The whole building was filled with fun activities. As you walked through the building there were people dressed up, handing out candy. There were two different bake sales going on! Inflatables to play on (one of Monte’s favorite), a haunted house (we did not go in), a soft-play area for the little kids to run and jump, AND free tours of an ambulance and fire truck!

Monte though the fire truck and ambulance were way cool!

Sunday after carving and painting our pumpkins …

We went to the Valley Junction Pumpkin Walk. The event was 2-6 pm and we went a bit late, around 4ish. A lot of the things were just finishing up when we got there, but we still enjoyed ourselves.

The highlight of the event was, of course, getting candy.

A lot of the stores participated and as you walked through the junction you could stop and get candy! One store, gave away fancy, collectible rocks! Monte thought that was pretty neat!

Green Grounds Cafe hosted children’s activities and you could get a balloon animal! Monte got a GIANT sword! There was also a chance to get a FREE pumpkin.

What fun Halloween activities have you been checking out?!