We checked out another FUN indoor activity … The Playground for Kids!

Another great place recommended by Des Moines Beyond 4 Walls! 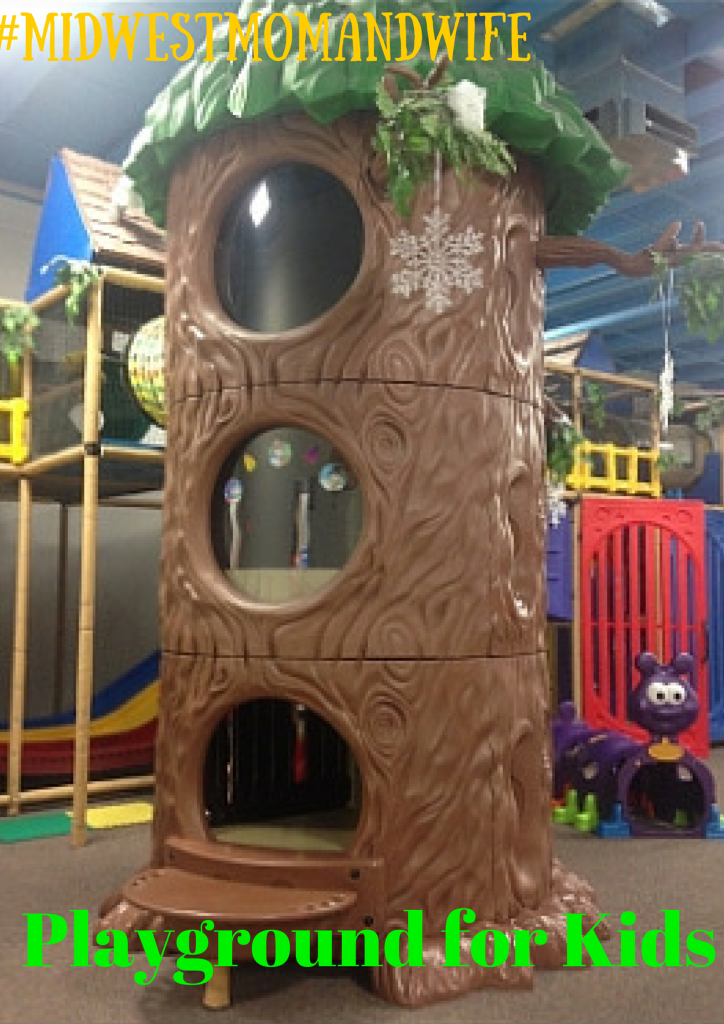 Playground for Kids is such an awesome place, located in Ankeny. It is full of so many activities. We went on a Monday and for the first hour we were there, we were the only ones playing!

You know when you go to carnivals and other kid events, they have the bouncy houses and inflatable slides? AND your children have to wait in line for their turn to go?! Well, we had none of that! Monte was so excited to go up and down the slides, over and over again. No one telling him to WAIT!

There was also a large tree house you could climb up and there were tunnels up above, that you could crawl around and slide down the many, many slides available to get down.

There was also a fun bouncy house that had a large “hoop” that you could throw balls into!

Admission into The Playground for Kids is $8.50 for 2-12 year old. Walker up to 23 months are $5.50. They also offer a $50 punch card for 10 plays, which saves you $3.50 each time you visit. I highly recommend purchasing this now, because this is a place where you will WANT to take your children to burn some energy this winter.

They also offer a3 month membership for $99, which allows discounts on concession treats, birthday parties, and unlimited visits!

I mentioned birthday parties … check out the awesome packages they offer! They also offer rentals of their inflatables if you decide to have your own party, at your house!

I definitely recommend visiting! You could even ask for a punch card OR membership for the holidays!

Yes, it’s that time of year again! Holiday music has been playing on a local radio station, since November 1st! And the stores have had their holiday decorations out since school started! So, pretty much if you have not started organizing and planning for the 2013 holiday season yet, you are way behind! 🙂

Last year,  was my first year to celebrate the holiday season with a kiddo and I created a Holiday Organizer. I must admit, it was VERY helpful! Whether you have a LOT of holiday planning, gifts to buy, things to bake, or just a few things to do; either way a Holiday Organizer will be helpful.

The great thing about creating a Holiday Organizer for yourself is you can determine what check lists, organizers, etc. YOU want to include in it.

This year I looked to Pinterest to get some inspiration and FREE printables to create my Holiday Organizer.

Here are the resources I used to create my 2013 Holiday Organizer:

What things would you include in your Holiday Organizer?

Not many are aware that there is a national holiday to celebrate grandparents. When I told my husband the other day that we were working on a project for grandparents day he was like “huh?”

It was in 1978 when Grandparents Day was officially recognized as a national holiday. It was the goal of Marian McQuade to make the youth aware and educate them the importance of seniors in our community. McQade wanted to make them aware of how much seniors have contributed to our history and also encouraged the youth to “adopt” a grandparent.

At first, Grandparents Day was only recognized by the state of West Virginia. When the idea of it being proclaimed as a national holiday was proposed and brought to the U.S. Senate, it died. McQade organized supporters, congressman, etc. in all fifty states for it to become a state holiday. Once she had proclamations of 43 states, she sent copies of the proclamations to Senator Randolph. At that time the U.S. Congress met again and requested that President Jimmy Carter sign a proclamation that proclaimed that the first Sunday after Labor Day, every year, be National Grandparents Day.

The statute cites the day’s purpose: “…to honor grandparents, to give grandparents an opportunity to show love for their children’s children, and to help children become aware of strength, information, and guidance older people can offer”.

All of this information was taken from Wikipedia and can be found here.

I have several ideas posted on my Pinterest page of ideas for gifts to give for Grandparents Day.

Monte and I found this idea here, but I changed it up a bit.

While I was at Michaels purchasing stuff for my DIY chalkboard, I picked up the supplies needed to do this project. Instead of tiles, I purchased wood squares, a can of colored spray paint, acrylic paint for Monte’s hand, and paint pens. All of this cost me about $25.00.

I then took the four boards outside and spray painted them. The spray painted I used was for indoor/outdoor use and left a glossy finish. On the can it said it dried in about 10 minutes. It DID dry quickly! I was able to get a couple coats sprayed, on both sides, in about an hour.

The next day, was the fun part! I had Travis help me with brushing paint onto Monte’s hand and placing it on the tiles. Monte did not really understand what was going on and was more interested in what the gooey stuff was on his hand. 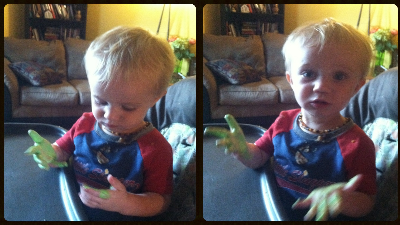 Afterwards, I let the hand print dry then took the paint pens which are AWESOME and wrote in Grandparents Day 2013 and Love, Monte.